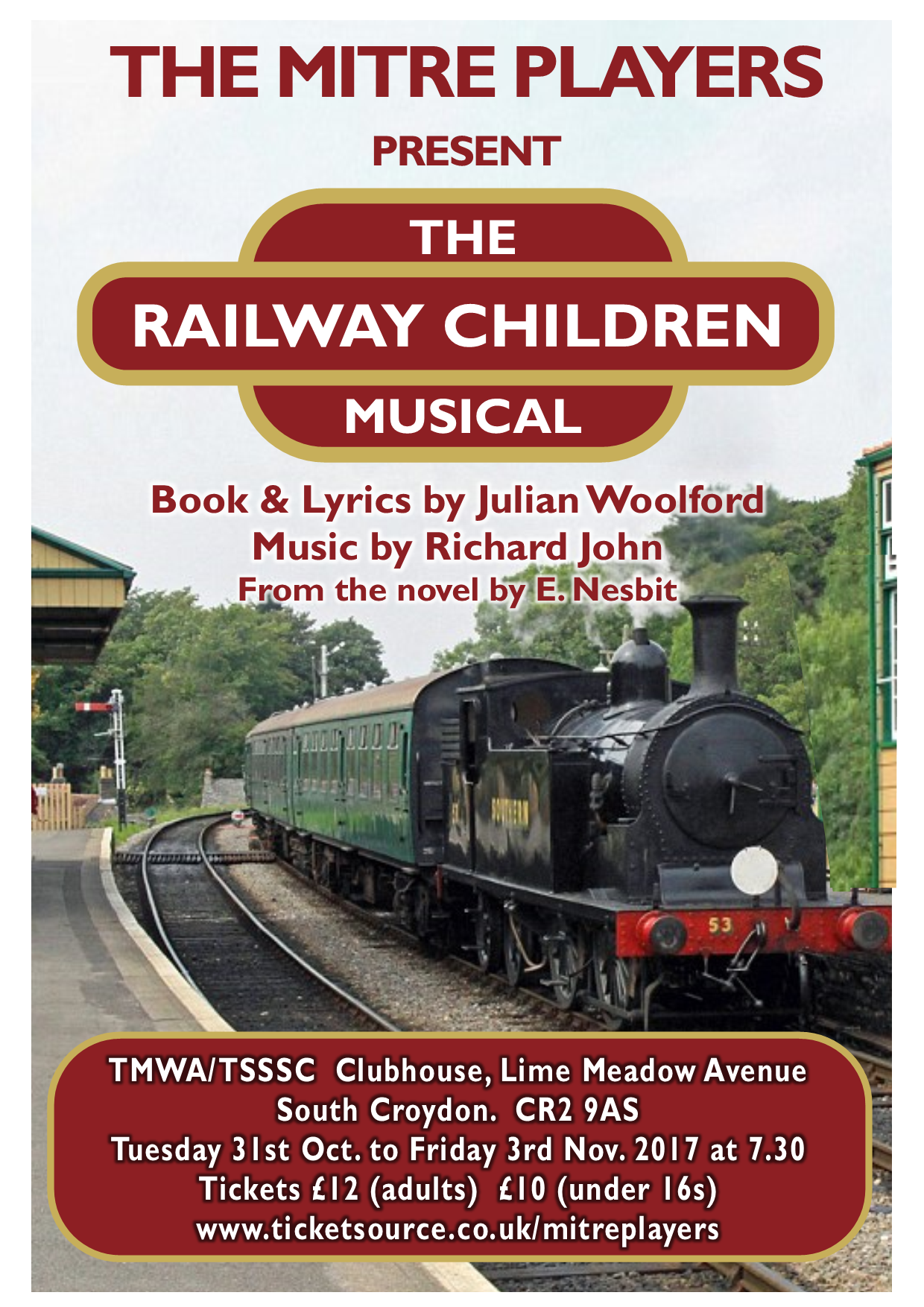 Below is Theo Spring’s unpublished review for the Croydon Advertiser.

E Nesbit’s much-loved tale has been part of many a childhood DNA. How would it transfer into a musical? The answer is – very well, and with no loss of poignancy and a huge addition of joy.

Woven together by Perks, the Station Master, so ebulliently played by Ziggi Szafranski, there’s music from him at the very start flowing into a big concerted number celebrating Christmas, in which family, servants and friends all take part. This is excellently choreographed by Joanna Morrison, to whom goes great credit for moving large numbers around on a small stage with real fluidity. Another triumph, both in execution and movement was the children’s Posh song where foes became friends.

This version, thankfully, keeps to the original story – for who would dare to change it, but the addition of songs and the sentiments their words express do certainly enhance the tale. The characters of the three central children – Bobby, Peter and Phyllis were extremely well portrayed. Jerri-Lee McManus with her charming voice and understanding of the role of Bobby, Kieran O’Brien as Peter with his comic one-liners and regression to a childhood of bygone days and Rosie Chambers as the appealing Phyllis. All three enhanced the production not only with their acting skills but with their naturalness when interacting with the adult characters. This was much in evidence with Bobby and Mother where a family bond seemed almost tangible. Fiona Robertson’s Mother demanded both a stiff upper lip and emotional breakdown, particularly required for her solo pondering on her husband’s return home, and she delivered on all counts.

More excellent portrayals from young actors were the four Perks children – James Ali, Eddie and Ellie Mcconnell and Dominic Semwanga. In good jovial voice, well-rehearsed and keeping to their different characters, they were a valuable part of the whole.

Within this story there are a good many different characters and, with some doubling up, these were always spot on. To Warwick Jones fell the glory of being the Old Gentleman who rescues both Mother from her illness and Father from his prison, played as an understatement with quiet philanthropy. A complete opposite was Ian Brown as the impoverished Szczepansky, babbling Russian and appealing vociferously for help.

The changeable Chris Backway transformed into both the Engine Driver, reluctant to speak about his train-stopping experience and Jim,  the young limping paper chase casualty from the tunnel. Both were given their own defined character. Julia Ascott was wonderfully disgruntled as Ruth the maid in the house in wealthier times and Mrs Ransome from the village where the family fled to their ‘poor’ house, The Three Chimneys. Hannah Millsted-Bowdery mixed Christmas fare in her bowl in the aforementioned Christmas number and then became a slightly care-worn Mrs Perks. Julia Gibbs flirted audaciously as Gert;  Andy Holton was a splendid Lord Fleet;  Fraser Macdonald a slightly off-hand Dr Forrest, prescribing cures without knowing if their wherewithal was obtainable and Jolyon Roberts was the fleetingly-seen father who made such a triumphant return through a steam train’s billowing smoke.

A crucial part of the story is the children’s heroic stopping of a train about to meet an horrific accident and both the tunnel through which it came and the train itself were ingeniously realised, with full marks for its conception and construction.

One small comment – it should be noted that any action of the play taking part on the lower part of the set near the floor will not be seen by the audience not sitting near the front, due to the rest of the audience’s obscuring heads.

An unobtrusive, but certainly effective lighting plot was designed by Alan Bishop. Anna Warnock did excellent work with the many period costumes. Musical MD Colin Warnock, oversaw the band of Dominic Mackie on guitar, Craig Backway on drums and Andy Buchanan on bass.

Creating and bringing the whole show to life was Megan Brown, directing her debut show. It was a triumph – for her, for the cast, for everyone involved and very much enjoyed by an appreciative audience.